Why we do not Register our Bison

The Purpose of Registered Animals

Most people would agree that when they purchase a registered animal, whether it be a dog, a cow, or any other animal, that they would expect that animal to be pure bred. When a farmer purchases a registered Holstein cow, they expect it to be pure Bos taurus without any Bos indicus or bison genes. I purchased my AKC registered Great Pyrenees with confidence that he was a purebred animal. Most people would rightfully assume that a registered animal was purebred and, if such were not true, the Registry would be promoting misinformation and be misleading by default.

That is exactly how the North American Bison Registry (NABR) of the National Bison Association (NBA) is designed. A NABR registered bison does not mean that the animal is pure bison absent evidence of cattle introgression. Rather, a registered animal may have as many as 3 cattle alleles (markers) to be entered into the NABR registry. Hence, there is no guarantee that a bison registered with the NABR is free of cattle introgression and the fact that these animals are registered creates misinformation by implication and promotes the spread of cattle alleles. Since ranchers interested in purchasing registered animals are likely those with an interest in avoiding animals with cattle introgression, the registry by default will contribute to the demise of the North American bison as a species.

Further complicating the situation and adding to the misinformation is the NABR Registered and "DNA Certified" classification of bison. Common sense would suggest that a DNA Certified animal was pure bison (to the best of our knowledge) and absent of cattle genes, alleles, and markers. But this is not so. Again, a NABR DNA Certified bison may have as many as 3 cattle alleles, genes or markers. This is misleading and a half-truth.

It raises the question of what is the purpose and meaning of having registered bison if they have evidence of cattle introgression and may not be pure bison other than to say they are registered (which falsely implies their purity).

To register our animals would be to condone and support this position of the NBA and NABR, which we cannot do. As such, although our bison are all eligible to be NABR Registered and DNA Certified, we will not support the NBA and the misinformation and misleading Registry.

Since the NABR is part of the NBA, I take the NABR's position and opinions as those of the NBA. I was told by the NABR that the entire issue of cattle introgression in the bison industry is simply a scam and a hoax. Under that premise I can understand the rationale for including bison with cattle alleles, but it was this premise that prompted me to investigate the entire issue of cattle-bison introgression. But my discussions with the NABR raised several conflicting policies and statements that are simply not compatible with each other, combined with misinformation and half-truths.

If the entire cattle-bison introgression issue is just a scam and a hoax and that "emerging research" will show that all these alleles are normal ancestral genes, why is the Registry putting a limit on 3 alleles (and random at that)? If these alleles are normal, why not allow 4, 6, or maybe all 14? This would seem to be a contradiction that it is all a scam and hoax. If it is all one big hoax and a scam as claimed by the NABR, why does the NABR offer cattle introgression testing? Why then is the NBA and NABR promoting and supporting this scam? I was also told that the presence/absence of cattle alleles in registered bison will not be publically available; it is considered proprietary and confidential information by the registry. When asked why this information would not be made available, I was told that the presence of cattle alleles could affect the value of the animal. Again, would seem to dispute the scam/hoax as well as the ancient DNA claims.

The NABR is wrong to encourage registration of animals with any modern-day cattle alleles as it serves little more than to propagate the further dissemination of these genes and misinformation by implication. The suggestion that the NABR considers the existence of "cattle alleles" in an animal to be proprietary information that will not be released to the public implies that the NABR considers these alleles to be detrimental, yet promotes their dissemination by concealing their existence. If the NBA/NABR believes the cattle-bison introgression is just one big hoax as I was told by the NABR, then the NBA/NABR needs to stop testing, stop recording, and publically support their position and not play both sides of the fence.

So what is the purpose of having a NABR registered animal other than to say you have a registered bison? It really has no real meaning.

This position of the NABR and NBA is in line with the NBA statement regarding cattle introgression questioning whether "absolute purity is significant" and whether purity "can be indisputably identified". This statement is troubling and like the other positions above, unsupported and contradictory. It implies that genetic purity within a species is not important. From a production standpoint I would agree, but most taxonomist and conservationists would tend to disagree in terms of preserving the species. Since a negative cannot be proven and science is always open to dispute, requiring "indisputable" evidence opens a never ending revolving door. Thus, cattle-bison introgression is not important according to the NBA and NABR.

The NBA/NABR stands alone, against groups such as the National Conservatory, the National Park Service, and Turner Enterprises, in taking the position that the existence of cattle alleles in the bison population has no meaning and by doing so, intentionally or not, are contributing to the demise of the species.

What the NBA and NABR should do.

If the NBA/NABR really has a bona fide interest in conserving the genetic integrity of the species and becoming true stewards of the bison, they need to abandon their unjustifiable and unsupported position on cattle introgression and alleles and support the efforts of others to control the continued spread of cattle alleles and the erosion of the bison genetic integrity. The misinformation campaign must stop.

This needs to start with a Registry that reflects bison without any evidence of cattle introgression. This would provide a true Registry and database of pure bison that can be relied upon by others, both private and public, seeking to create and/or maintain herds without cattle alleles. This would have meaning and provide a useful service. Conservation herds likewise must be free of cattle alleles because conserving bison with evidence of cattle introgression is not conserving the species. Provisional status could be provided to ranchers that have a program to eliminate animals with cattle alleles in their herd as this will take time in large herds. At present, having a NABR registered animal or having a NBA Conservation herd has no meaning whatsoever, other than to imply something it is not.

The NBA needs to educate the bison industry and other members of the Association about the problem of cattle introgression genes and what can be done to stop the continued spread and dissemination of these genes.

Only by these measures can the NBA claim to be stewards and guardians of the majestic North American bison. Otherwise, the NBA should abolish their claims of stewardship, terminate the NABR and the Conservation Herd Registry and simply support the interests of the bison meat industry.

Until such time as the NBA and NABR establish guidelines that are based on scientific facts and not personal opinions and self-serving interests, we will not register or otherwise support in anyway the NABR. All of our testing is performed independently through Texas A & M University.

Can these animals be NABR Registered and
DNA certified? 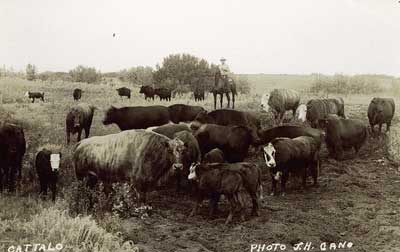