Detection of
Cattle Introgression in Bison

Detection of cattle introgressions in bison is based on the same basic principles and guidelines as used in parentage and ancestral testing in humans using molecular phylogenetic methods [2, 3]. The existence of genetic mapping databases for a host animal species provides for the identification of specific markers allowing for accurate and reliable determinations of ancestry, including introgressions.

There are 2 types of tests currently being used to detect introgression in bison: mitochondrial (mtDNA) and nuclear (nDNA) tests. Without going into detailed genetics, there are some basic understandings necessary. Every living animal has DNA, RNA, and proteins. In general, closely related animals have a high degree of agreement in their DNA (i.e., their DNA is very similar), while the DNA of animals distantly related show patterns of dissimilarity and divergence (disagreement). There are basically 2 types of DNA in mammals, the nuclear DNA found within the center of a cell (nucleus) and mitochondrial found within small organelles known as mitochondria [4].

Mitochondrial DNA (often abbreviated mtDNA) is a small piece of circular DNA found within small organelles known as mitochondria inside every cell that convert chemical energy from food into a form that cells can use, adenosine triphosphate (ATP) [5]. Mitochondrial DNA is maternally inherited (passed from the mother to her offspring) providing the ability to trace maternal lineage (matrilineality), making mtDNA the mainstay of phylogenetics (evolutionary history and relationships) and evolutionary biology. It also permits an examination of the relatedness of populations, and thus has become important in biological anthropology (biological development) and biogeography (distribution of species and ecosystems in geographic space).

Mitochondrial DNA testing is particularly important in bison because, since only crosses between bison bulls and domestic cows are successful, virtually all F1 offspring are females, and nearly all fertile backcrosses to bison are also females [6-8]. As such there is a disproportionate incidence of bovine-type mtDNA in bison [9]. The presence of bovine-type mtDNA in bison is clear evidence of cattle introgression and a hybrid animal.

However, mtDNA data alone are often hard to distinguish between closely related species to any large degree and does not provide any information on paternal (father) lineage (patrilineality). For instance, if a cattle bull mated with a female bison, the hybrid would be pure bison based on mtDNA analyses alone (mtDNA is based only on the mother) [5, 8]. Because of these deficiencies, other methods of analysis must also be used. This is why nuclear (autosomal) DNA tests need to be performed in addition to mtDNA testing.

Nuclear or autosomal DNA tests (nDNA) currently employed relies on the detection of differences within microsatellites of nuclear DNA [10, 11]. Understanding nDNA based tests requires a brief explanation of DNA structure. The DNA molecule is composed of 4 different chemicals known as nucleotides: adenine (A), guanine (G), cytosine (C), and thymine (T) arranged in a linear fashion [4]. The sequence of these four nucleotides at specific sites, or genes, along the chromosomes is what determines the genetic code for each individual animal. To create the double strand, G associates with C (G-C) and A associated with T (A-T). There are also specific sequences of bases repeated in a tandem fashion referred to as microsatellite DNA markers.

Microsatellites, also known as short tandem repeats or simple sequence repeats, are pieces of nuclear DNA in which small sequences (pieces) of DNA are repeated, typically 5–50 times [10]. The genomes of mammalian species may contain thousands of these microsatellite markers and they may occur at thousands of locations within an animal's genome. Because they do not code for anything (often referred to as junk DNA), they have a higher mutation rate than most other areas of DNA, leading to high genetic variability and specificity. A simple example of a microsatellite would be the sequence "...TCAGGTCTAGAGAGAGAGAGAGAGAGAGAGTGCTTAT..." in which the sequence AG is repeated 11 times. A difference would be created by the substitution of one or more of the repeats with another nucleotide such as "...TCAGGTCTAGAGAGATAGAGAGAGAGAGAGTGCTTAT...". These changes are also known as single nucleotide polymorphisms or SNP (pronounced "snip") [12]. Differences may also be reflected in the number of repeats with some species having more or less.

This variability (diversity) and specificity of microsatellites make them ideal for a variety of investigations including human and wildlife forensics, parental analysis, degrees of relatedness, evidence of population bottlenecks, gene flow between populations, genetic fingerprinting, in addition to their application in cancer and other disease diagnoses [10]. Because of the variability and specificity of microsatellites, selecting and examining appropriate microsatellites can provide the ability to differentiate closely related animals and even identify individual animals, e.g., "fingerprinting". As such, all animals can be separated and identified with microsatellite nuclear DNA examination.

The detection of any cattle-associated microsatellites or bovine-type mtDNA is clear evidence of past cattle introgression and the presence of cattle genes.

Interpreting the results is a little more difficult than understanding the tests.

In addition, the lack of any cattle-associated markers does not necessarily mean that there was no introgression, only that it was not detected by the methods currently used. There are many examples whereby an animal with known cattle introgression in its history (phylogeny) has no demonstrable introgression by current methods. Take a bison bull with cattle-type mtDNA but no nuclear markers (there are many of these animals). This bull unequivocally had a bovine cow as a distant grandmother in his past and unequivocally has cattle genes, just doesn't have any of the known and verified nuclear markers. Since mtDNA is not passed by the male, this bull will pass his cattle genes to all his progeny but no nuclear cattle-associated microsatellites or mtDNA, i.e., his offspring will test as pure bison when they are not. Another example of cattle-bison introgression without mtDNA or nDNA markers includes the "white buffalos" that contain the Charolais silver locus protein homolog (SILV) gene often with normal bison-type mtDNA and no nuclear cattle markers.

These are just a few of the known cattle genes, as opposed to markers, that are not readily detected by current methods. Further examination of the bison genome will shed light on these markers and the presence of genuine cattle genes, or their associated regions, and uncover the true extent of cattle introgression in modern-day bison.

Efforts are currently in progress to define the bison genome and identify the actual cattle genes present. Using massive parallel sequencing (also called next-generation sequencing or NGS [19]), several groups are attempting to sequence the bison genome. This may define the actual amount of cattle genes in introgressed bison once the complete sequence of the "pure" bison genome is known and corroborated by others. However, while a great deal of valuable information will be derived from these studies, they are not without difficulties. The technology of NGS produces short reads (50-400 nucleotides at a time) and relies on computer algorithms to assemble these short reads into longer lengths [19]. This assembly is not without error. Determining the true bison sequence will require sequencing more than just a handful of animals and will require independent corroboration. Although NGS is becoming more affordable and super-computers for sequence assembly are readily available, the technology is relatively expensive which hinders efforts and the number of animals that can be examined. In addition to limitations in technology, sequencing the bison genome by NGS may present other difficulties and complications.

Since we do not know the true extent of introgression, the issue of what constitutes a pure bison may come into question; can enough bison be sequenced to determine "pure" bison within a reasonable degree of certainty? It is also very possible that all bison have some evidence of cattle genes (actual genes as opposed to markers) due to cattle introgression in the late 1800's and early 1900's. This has its own implications. In contrast, if NGS determines that there are relatively few genetically pure bison, it could open a can of worms including the possibility that pure bison could get listed as an endangered or threatened species with wide implications to the industry [20].

It is clear that the issue of cattle-bison introgression continues to be an evolving situation that is not likely to go away in the near future.

Next Articles in this Series:

Does it really matter that bison have evidence of cattle introgression?
That really depends on your business model and personal beliefs. There are several views, all of which may be valid.

This is a Newsletter series sent to over 1500 bison producers in 2018 in hopes of stimulating the industry to stop poluting the bison genetics. The complete series can be found below or as PDF files as follows:

The original introgression page can be found HERE 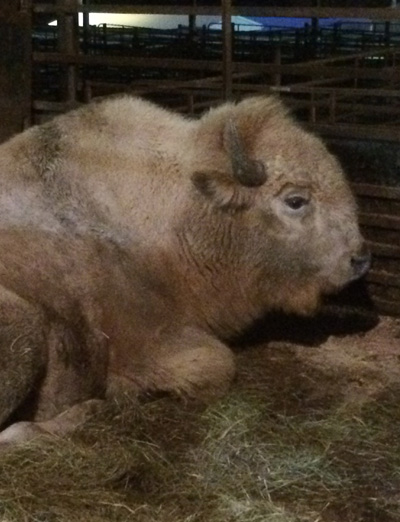 Bison-cattle crosses with the Charolais silver gene. The above animal was offered for sale at the 2016 Missouri Bison Association Show & Sale. 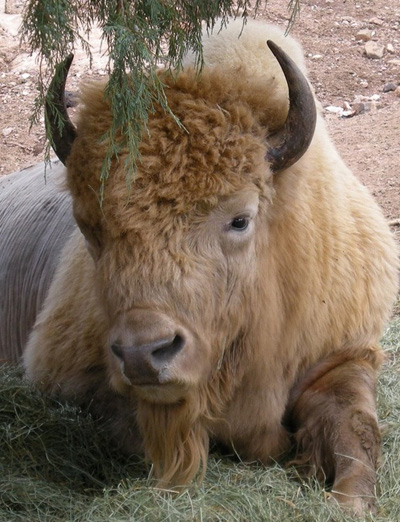